It may seem like a simple recipe, however, it is a reminder of how we can easily make the right choices when it comes to eating. A bowl of porridge will feed you well to make it through the morning, with a wholesome whole grain that has saved populations from starvation, and only takes a few minutes to make from scratch, and costs about 25¢ a serving, including milk & a bit of brown sugar.

My relationship with porridge (oats) started at a very early age. We had a certain pot that Dad used to make porridge in every morning. It was thick walled aluminum, a type probably not even sold today. When the handle went, he carved a new one and bolted it on. When the pot lid knob went, he carved a delightfully threatening little totem to replace it.

Every morning through our school years, Dad would get up and make a big pot of porridge for us all, even though we were all still sound asleep. It would be cooled and congealed by the time we would be eating it. But, that was breakfast. This was also at a time prior (long prior) to microwaves being a common kitchen tool for reheating. One morning Dad taught me the trick of frying leftover porridge with a bit of butter and brown sugar in a cast iron pan. Amazingly delicious. It may sound like we were “down on our luck”, but our family always took pride in being thrifty. But never to a fault.

Today the health virtues of starting our days with a bowl of large-flake, old-fashioned oats, made into porridge, has been well documented. We might now add a handful of berries, or a chopped apple & some spice, but it still is able to satisfy us well until lunch. So here’s to putting your porridge pot back on the hob, and starting your day with a great, easy, and thrifty breakfast!

In a medium sized pot, heat the water, with the salt, to boiling.

Add in the oats, stirring continuously, until it just returns to a boil. 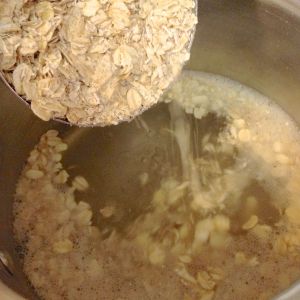 Immediately reduce heat to a simmer, so it is actively simmering without boiling over.

Set your timer to 10 minutes.

At 5 minutes remaining, add in the spice and apple if using. If you’re using berries, wait until the 10 minutes is up before adding.

After 10 minutes of cooking, remove the pot from the heat. Stir in the berries if using.

Cover the pot, and let rest for at least another 5 minutes.

Spoon into bowls, sprinkle with a bit of brown sugar, and add a bit of milk if that’s the way you prefer it! 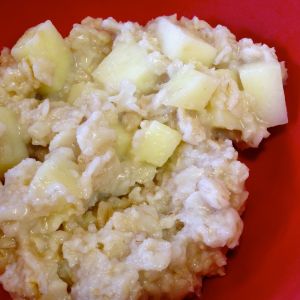 Enjoy, and have a great morning.