So many years since I’ve looked at this page, and with those years have come changes.

Stella is still part of our herd, but we lost Tara, and now have Tauni and Sage making our herd of three.  They bring us joy everyday, with their free roaming between four areas of the farm.  They are a close knit herd, calling out to one another, which is a lovely addition!

Our cow herd is down to three.  Is that even a herd?  We are trying to reduce our daily work load, allowing more freedom to enter into our lives.  This is a tricky change, as caring for the land and livestock is good for our general wellness.  There is still fencing to be checked, and animals to be fed, so its not like we are sitting around looking for things to do.

With Sprite’s passing in November, we saw an end to over two decades of managing a small horse herd, being led by this partially blind mare. For all that time, we’ve needed to oversee the dynamics of the herd, and the fact that Sprite would run through a fence to be with the herd, even if a gate was open near by. We did manage though, but this necessary management has curtailed the herd’s freedom.

Today, we let Stella & Tara out into the north woodlands for the first time. To see Tara, the Standardbred, full out trotting while snorting all the while, was joyful! Little Stella, the mini, was galloping hard to keep up. Right now I can see them both back there from the office windows, still exploring, always coming back to the gate to orient themselves, and then off to discover new trails, and their new environment.

I’m looking forward to spring, when they can thunder out to the front pasture, where I’ll be able to watch them from my kitchen window. All things do pass, and it is exceptionally hard sometimes. But change brings new beginnings, and it excites me to see what is around the corner. 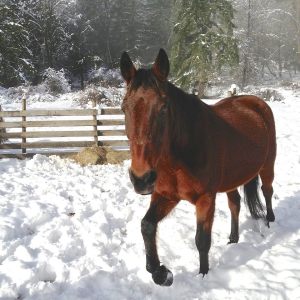 Thought I’d take a walk and check fences this afternoon.  March is a notorious month for cattle finding their way out any breaks that exist. I suppose it’s the lure of patches of brilliant green grass just on the other side.

I started by crossing the southern valley bottom, where the fence crosses the lowland where only grasses grow.  Rarely is this fence compromised, as there aren’t any trees to fall on it. The only difficulty is the meandering stream; which you need to cross several times, with lots of wet leaps from one grassy hillock to another.   The property comes to a wedge shaped point where the south boundary meets the east.

Walking the eastern boundary of the property, which is just shy of a kilometer, I was amazed again, just as I am any time that I walk it, how beautiful and diverse our farm is.  The eastern side is mostly sandstone cliffs, made of huge blocks, and dotted with round entrances to interior bubbles.

You can see where the birds nest, and the small outcrops of different mosses and rock flowers.  Sheets of the sandstone lean against each other, creating huge areas for our bat population.

There are pieces of the cliff at the bottom that are the size of cars & vans, when walking you’re always aware that somehow they moved from up above you, to down below you.  One hopes it won’t happen this day.

The trails where the cattle walk can be as narrow as a foot wide, on extreme slopes of rubble and earth. While walking them as an upright creature, your uphill hand is always looking for a root or something sturdy to hold on to.  Much narrower trails head straight up and down the slopes, marking the deer routes.

Although there aren’t many fences along this route, as we rely on the fact that the cows are unable to use ropes to climb, the fences we do have are very difficult to build and maintain.  Sometimes, it’s just a series of fallen limbs stacked on the uphill side of two standing trees, creating a small wall that makes it just too difficult for the cattle to pass.

Today, all was well.  The cows watched me from the valley bottom as I progressed north. Wondering what the heck I was up to. More likely, wondering if I was carrying feed.

Spent several hours late Thursday night overseeing our final calving of the year. Our herd’s matriarch was late being bred this year, most likely due to her status and the age of our young bull. We had a houseful of summer visitors, who had slowly run down their evening playing board games, and the house was at the state of hush.

I was letting the dogs have their last bit of time out for the night, and heard mooing from two distinctly different places on our property. Once I had the dogs settled, I headed out to look for the lone cow. She had found a copse that shielded her from all viewers. Leila has done this many times before, and settles into a pattern that shows her progress. I sat 30 feet away on a moss covered rock, and waited.
By 11PM, the rest of the herd came round. The calves settled down amongst the sword ferns, while the big steers came near me, to lay down and chew cud. The other cows moved closer to Leila, and just stood and waited. All of us formed a half circle around her, while a rock face protected her from behind. We don’t have any predators here that they would need to worry about, but instinctively they protected.
3 hours slips to 4 quite easily when it just you, the night air, and a herd of very patient, quiet animals.

She had a fairly easy labour, producing a beautiful grey and white heifer. I helped only to make it easier for her, clearing airways etc. Again, I returned to the steers. I decided not to return to the house until the baby was up and active.  It’s amazing how your eyes adjust to the darkness of a clouded summer’s midnight sky. I could easily see the brilliant white of the new calf, as she was being cleaned vigorously by her mom.  Within the hour, she was up and walking, hale & hearty as we always hope for. I could wait ’til the morning to be sure that she was nursing well. Off to bed in time to turn the light off at 3AM.

It’s moments like these that make me so thankful for doing what I do, and where it all takes place. 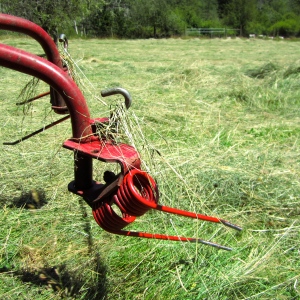 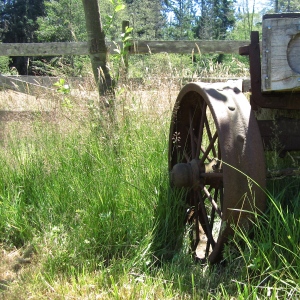 Cut and ready for tedding.

No matter how many years I’ve been doing this, I am still in awe of the newborn and its instincts.

It’s calving time.  The cows are heavy with calf, and the meadows are rich with grass to nurture them while nursing.

Our first official due date for this year (2013) was May 27th.  I thought we weren’t going to be seeing any calves until this weekend, but Rosalind was on her own schedule.  On Tuesday, she quietly removed herself from the herd, and went into the deep woods to have her calf.  Everything went beautifully, with the calf up and nursing quickly.  Once everything was settled and the calf sleeping, she wandered out to graze with the rest of the herd for the evening.  She is very herd oriented, and likes to have her calves with the group as soon as possible.  By the next morning, she moved with them to the other end of the valley with her calf trotting alongside.

Some of our cows like to keep their calves well hidden for up to a week until presenting them to the world.  We’ve spent many hours looking for calves that must be here somewhere.   I’ve carried several calves through swamps to get them to higher ground, and safer surroundings.  But, in all the years of farming, we’ve never lost a calf to the mom not knowing where it is.  They may have to trek back and forth over the whole property to find it, but they always do.

The next two ready to calve look to be Stardust & Quinnie.  We’ll bring them in to the maternity field later today, as it’s so much easier to keep track of things in a 1-acre field instead of many acres of mixed woodland and meadow.

And here are a few more photos from today…

We are so fortunate to live where we do.  Thetis Island is remote enough to feel removed from the hustle & bustle of the city, but close enough to access it easily, if we desire.  Lawrence Spring Farm is made up of an eastern slope and a south facing valley with wonderfully producing springs.  Our herd of cattle has roaming rights to about 50 acres, on a farm that has been farmed for over 100 years.  Nearer to our home, we have a few pastures for the horses, the goat and for calving-time, as well as a chicken house & yard.  There are apple, pear and plum trees, but not much else in the way of cultivated produce, besides the herbs & rhubarb growing in amongst the flower gardens. Blackberries are abundant, and are picked easily close to the house. We used to have a fairly large vegetable garden, but found that our needs for different quantities of produce made it difficult to plan. Also, our time was so limited in the peak growing season, so we had to let it go. Fortunately we have a nearby farmers market, and we get by very well.  Our beef is raised naturally with mostly browse & graze, with supplemental local hay in the winter.  We are not an approved organic farm, although we’ve never used any chemicals on our land, but with out certification, we simply call our beef, “happy & naturally raised”. 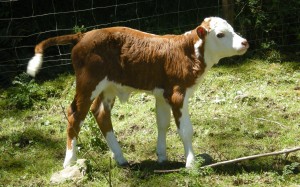 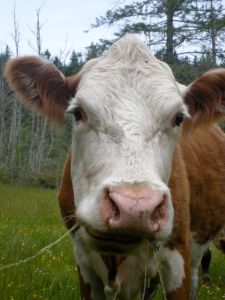 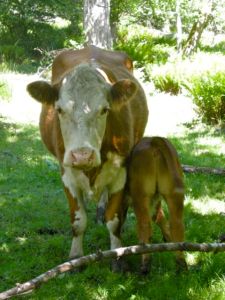 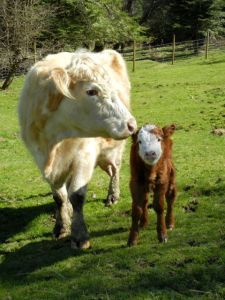