A few years ago, I was asked to create a signature dish for a restaurant opening.  It needed to be available all the time, and a go to dish for the clientele.  It also needed to showcase seafood from our region.  One other thing I added was that it needed to be simple enough that all the cooks could make it and its qualities would be consistent.

As I was doing this on my own, well before the restaurant was due to open, making this dish once a week was about all my husband and I could handle without getting tired of it.  So over several weeks, this is the chowder I made.  Creamy without being too thick, and enough chunks of fish to know what you were eating!

It calls for Pacific Sockeye salmon, but you could use any wild Pacific salmon.  For the white fish, halibut is best, but you could use Pacific cod or Atlantic Pollack in its place (but then you can’t really call it Pacific Fish Chowder).

I’ve halved the recipe for home-use, but it doubles beautifully, so if you’re having a houseful one weekend make a double batch.

Cook the bacon in a skillet over medium heat until browned.

Using a slotted spoon, remove it to a kitchen paper lined plate.

Pour the fat into a measuring cup, and return 4T back to the skillet. Reserve the remaining fat for another use.

Return the skillet to medium heat, and add in the onion and garlic.  Cook until translucent, and not browned.

Add in the Old Bay and the turmeric.  Stir to distribute well.

Add in the diced carrots, and let cook for 3-4 minutes, stirring occasionally.

Move the seasoned vegetables to a soup pot.

Over medium heat, slowly add the chicken stock to the vegetables.

Bring to a simmer, let cook for 8 minutes.

Add in the potatoes, adding a bit of water, if necessary, to have the vegetables just submerged.  Cook until the potatoes are tender.

Whisk the flour into the cream. (The flour will attach itself to the fat, and you’ll have a lump free soup.) 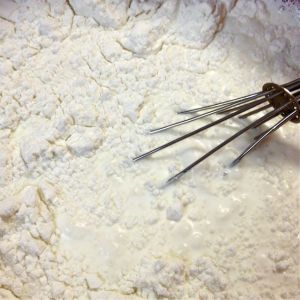 Add in the cream and bacon.

Bring back to a simmer and cook, stirring occasionally until thickened.

Add in the cubes of fish, cook gently until opaque.  This takes about 5 minutes or so.  As long as the soup is cooking gently, the fish won’t over cook.

Season with salt & pepper, to taste

Garnish with chopped parsley if desired.