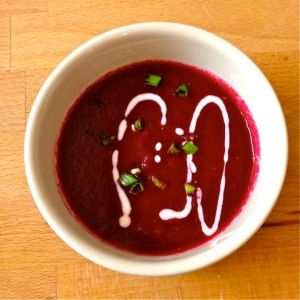 My first memory of beets was at one of my Aunt Laura’s epic Sunday lunches.  She would serve many different vegetables, along with the Sunday “joint”.  This was what we used to call a large piece of meat with a big bone in it.  It would be cooked on the old oil stove.  There would be pitchers of well-water cooling in the fridge; I’ve never tasted that water’s equal since.  Aunt Laura would send me to the basement to get a jar of beans, beets or whatever.  It was kind of scary, but then it was on a farm, and there were lots of places and things to thrill me.  She would slice the home-canned beets and spiral the slices on a plate.  I think it was there that I learnt that the meat was only one portion of a very full table.  Everything was grown in their garden.  They raised first fresheners (cows that were to calve for the first time) for the neighbouring dairy farm, in exchange for meat and who knows what else.  The drive up to their place was bordered with standard Gravenstein Apple trees.  There was a stone bullpen in the barn with tall walls that I can remember just being able to peek over.  The hay was stored above and we’d use the super narrow & steep cobweb filled stairs to get there.  That was a special place, as it was where the barn cat would have her kittens.  Anyhow, I digress: farms, vegetables and kittens!

4 medium sized beets, washed well, both root & stalk ends cut off, as well as any blemishes, then cut into 8 fairly even sized pieces

2 T of thinned sour cream or some plain cream, for garnish

Put the stock and unpeeled beet pieces into a large pot.

With the heat on medium-high, bring to a boil.

Simmer covered until beets are fork tender, about ½ hour.

While the beets are cooking, heat the oil in a skillet over medium-high heat.

Add in the onion & celery. Cook until translucent.

Add to the beets when both are ready. Simmer for another 10 minutes.

Stir in the ginger, 5-spice powder, and soya sauce.

Strain to separate the solids from the stock.

Using a processor (or an immersion blender), purée one third of the vegetables and one third of the stock until very smooth. Return to the pot. Repeat two more times, until all the soup has been processed.  The soup should resemble red velvet. 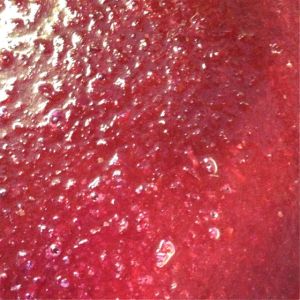 Season to taste with salt & pepper.

Return to heat until heated through.

Serve with a drizzle of thinned sour cream or plain cream, topped with a sprinkle of green onions.