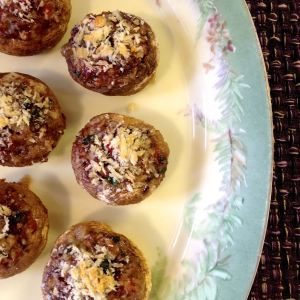 Mushroom caps have long been a staple on appetizer buffets, and rightly so! They’re easy to do, usually just a mouthful or two, a perfect finger food. They’re typically filled with cream cheese, maybe with some crab mixed in. Cheese seems to be in so many appetizers, so if there’s a way to hold back on the stuff (this is me talking, She Who Wants Cheese) I try to do it whenever possible. This recipe is full of umami, and can easily be adapted to be Gluten Free or Vegan (see following main recipe). I usually allow for 3 per person if they’re to be plated and served before the salad course. However, if they’re part of an appetizer buffet allow for 1 – 2 per person.

1 lb. of 1½”- 2” firm white or brown mushrooms – stalks should still connect to the caps

1 T oil + some for drizzling

Brush the mushrooms clean with a dry cloth.

Remove the stalks by gently pushing away from you, and then pulling towards you. They should make a “thwuck-thwuck” sound. Reserve the stalks. 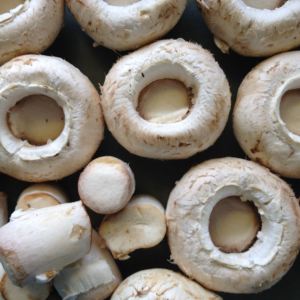 Arrange the caps top down on a parchment lined baking sheet. They can be quite close together, but shouldn’t touch. The little bit of space helps to stop them from steaming when they should be roasting.

Add the stalks to the bowl of a processor. Process until minced. Remove to a bowl, reserve.

Add the onion & garlic to the processor (no need to rinse out from the mushrooms), and process until minced.

Heat the oil in a large skillet over medium high heat.

Add in the onion and garlic and cook for about 3 minutes until they are softened and there are a few browned bits.

Stir in the red pepper, and continue cooking for another 2 minutes. 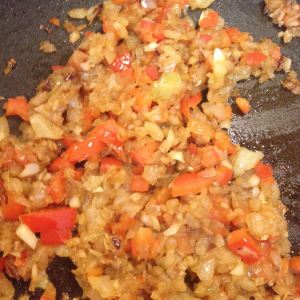 Stir in the mushrooms, and continue cooking for another 2 minutes.

Stir in the parsley, and continue cooking for another minute.

Season with a bit of salt & pepper.

Remove to a bowl, and let cool for 15 minutes, stirring occasionally. 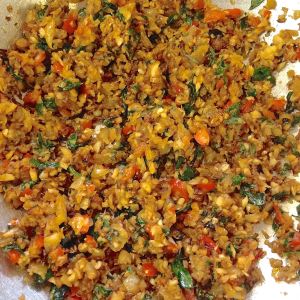 Once cooled, stir in the grated Parmesan. 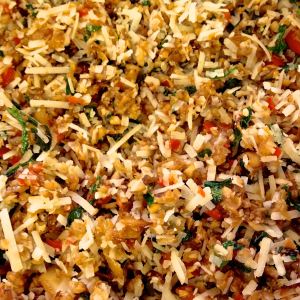 Fill each of the caps with the filling, keeping the filling level with the opening, being sure it is well filled.

Loosely mound the remaining filling on top of each one.

Drizzle a little oil over all, being sure that each cap gets some.

Sprinkle a little Panko on each cap. 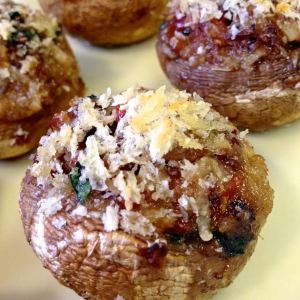 While they’re baking, mix a topping of ⅓ c Greek yogurt and 1 teaspoon of minced chives.

Once the mushrooms are out of the oven, dollop each with a small spoonful of the topping, and serve. 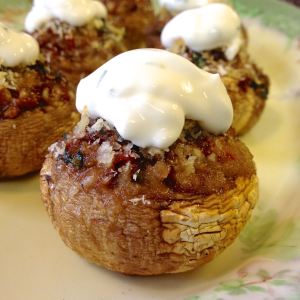 Gluten Free: instead of Panko to top the mushrooms, use a bit of Parmesan

Vegan: replace Parmesan with some fine bread crumbs (about ½ a cup), adding  the breadcrumbs at the same time as when you add the minced mushrooms to the skillet. Don’t over stir, as you want to allow the crumbs to brown. Do not serve with the optional topping. Alternately, add in ½ cup of finely chopped green or black olives instead of the Parmesan or breadcrumbs.  Add into the mixture after it has been removed from the heat.