The end of summer is marked by the bounty of blackberries found on the islands.  We have two types, Himalayan, and the native evergreen variety.  Picking berries in Mt. Lehman when we were growing up, our Uncle Angus set us all out with tins hanging from around our necks with a bit of string.  This left both hands free for holding back the brambles while plucking the ripe berries (and some, not so ripe – after all, we were young).  He would always tell us to leave the evergreen ones for the deer as we would pluck the huge Himalayans.  My husband, Bill, and daughter, Sheila, both prefer the flavour of the evergreen ones, while I still go for the big Himalayans.  But as we all pitch in to pick, my cooking seems to always have a mix of the two.  We have enough on our farm that there’s sure to be lots left for our ever present deer.

This is actually an Upside-Down Cake.  Even though it might seem fiddly when reading through, it is in fact, very simple.  This is a French recipe out of an old Williams-Sonoma book, Savoring France.

4 large eggs, divided – free range will give your cake a beautiful golden colour

Put the 7T of melted butter into the baking dish.  Stir in 1 c of sugar. Set aside.

Remove from the oven and arrange the fresh berries in an even layer over the sugar mixture.

Put the egg yolks into a small bowl and whisk in the remaining 1T of melted butter.  Set aside.

Put the egg whites into the bowl of a mixer.

In a small bowl, whisk together the flour, baking powder & salt.

Beat or whisk the egg whites until they form firm peaks. Do not overbeat.

Fold in the remaining 1c sugar, in about 4 parts.

Fold in the egg yolk & butter mixture, again, in about 4 parts. 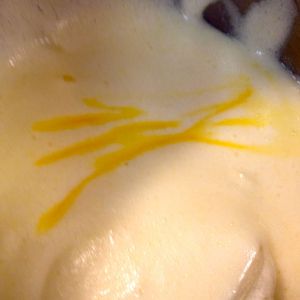 Finally, fold in the flour mixture, again, in about 4 parts. Dust it over the top instead of dumping it in. 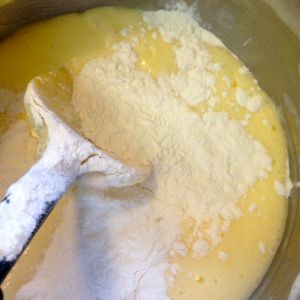 Pour the batter over the berries in an even layer, smoothing as needed.

Bake until a toothpick inserted into the centre, comes clean.  It will take at least 30 minutes, but can take longer depending on the temperature of the berries, and the diameter of the baking dish.

Let rest for 10 minutes after removing from the oven.

Slide a knife around the edge of the cake, separating it from the dish.

Holding a large plate on to the dish, invert carefully.  The cake should easily slide out.

Serve warm – the cake should be taken out of the oven at least 1½ hours before serving.

This is delicious with vanilla ice cream or a drizzle of fresh cream – but serves beautifully just as it is.