In my early 20’s my younger sister and I shared an apartment.  We had two cats, two bedrooms, and groups of friends five years apart.  Somehow it all worked.  I was big sister to many of her friends, and my responsibility for her kept me with my feet firmly on the ground.  We started off in a two bedroom ground floor suite that we could hop over the hedge and come in through the sliding doors, in a complex that had a pool that we never used.  Next step up was a one bedroom in a more amenable area, in an older building with bigger rooms, with a creepy guy across the way that used to exercise in his briefs (we called him Jock Strap).

Finally we moved into a huge two bedroom third floor suite.  It had been left in disrepair, so we made a quick agreement with the manager to paint the whole of it in exchange for the damage deposit.   There was even a horrible mustard yellow “feature” wall that had a large dark stain dribbled down it.  With a group of friends over one weekend (and a can of marine grade paint to cover the yellow wall), we got the whole of it done and moved into our first home-like suite.

There was a green grocer up the street who would sell us a stalk of celery or half a head of lettuce.  The butcher was across the street, with a grocery store across the laneway.  We ate well.  Not a lot, but well.

One of our mainstay dinners was a couple of pieces of chicken seasoned and baked for ½ an hour or so, while we cooked some rice and a veg.  Very plain, but it worked.  I think the format of the supper allowed me to get some nutrition in fairly quickly after a day’s work before I’d head down to the stables to train for a couple of hours.

Rice has always been an easy way to round out a meal.  I know we’re supposed to only eat brown rice, but it just takes too long!  I use it, but more usually Basmati or Japanese.  I’ll get my whole grains elsewhere.

When a large bowl of rice gets plunked down on a table family style, it quickly conforms to the shape of the bowl, and becomes less appealing.  This recipe builds in a bit of sauce, so it stays moist and tempting far longer. Tuck a couple of flowers in the side and your family will think you’ve gone all “gourmet” on them.      Click here for printable version.

Put the oil and chopped shallots in a small saucepan. 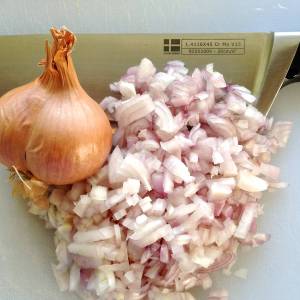 Cook on medium-high heat until the shallots start to sizzle.

Stir occasionally and lower the heat to prevent scorching.

Cook the shallots until golden, and remove from heat.

Stir in the green onion.

Sprinkle the salt over top and let sit while uncovered while it cools. 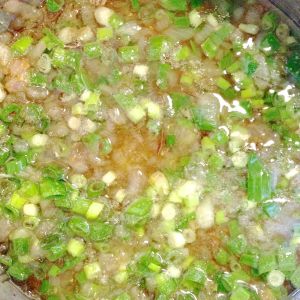 Once cool, store covered in the fridge for up to two days.

Let come to room temperature, or slightly heat it before using.

In a large saucepan, whisk together the water, coconut milk, garlic, and salt.

Cover and bring to a boil.

Stir in the rice.

Re-cover and reduce heat to a low simmer.

Remove from heat and fluff rice with a fork.

Cover and let rest for a few minutes before serving.

Stir in the warm onion sauce.