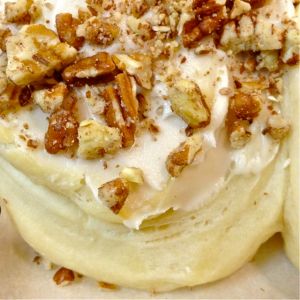 We buy our hay from the island’s Capernwray Harbour Bible school, and from a Vancouver Island hay producer and seller, Ray.  Ray’s trucks have “Make Hay with Ray” printed cheerfully on them.  Our usual purchase is about 200 bales and it arrives early in the morning and we have about 40 minutes to get it off loaded and into the barn, so that Ray can get his truck back into the ferry line-up for the return trip.  Although we’ve done it before with no outside help (I can still hear the girls grumbling…), Capernwray offers to help most times, by arriving with a team of 8 or 10 healthy, strong young men.  They work so fast and so hard and within about 30 minutes, the truck is unloaded and the hay safe and dry in the barn.

They work so cheerfully, and take the load from our shoulders (literally), it’s the least we can do to offer them a drink and some baking for their kindness.  Late yesterday I made a batch of Butterhorns, getting them iced and topped with nuts late in the evening.

It was so fun to be able to carry out a big baking sheet full of treats to some very appreciative people.  These aren’t difficult to bake, and are so rich and yummy, that they absolutely fit the bill as a snack for hard workers, or a not so hard worker to enjoy with a cup of tea.

The original recipe was passed along to me by a friend, I believe in the late 90’s, and still gets pulled out at least once a year, and usually for our hay boys.

Warm the milk with the sugar and 1 c of butter, until the butter has melted. 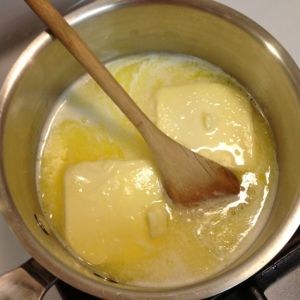 Pour into the bowl of a mixer, and let cool until just warm.

While this is cooling, mix the yeast with the lukewarm water and teaspoon of sugar and let sit to proof.

When the milk mixture is cooled, and the yeast proofed, whisk the two together with the egg, until uniform. 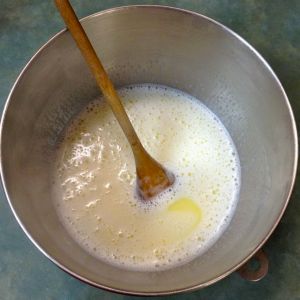 Whisk in 3 cups of the flour.

Add two more cups of flour to the wet dough, and start to knead using the dough hook.

Add in the last cup of flour in two parts, until all is incorporated.

This makes fairly wet dough, so don’t expect it to firm up as the dough for bread would.

Knead for at least 6 minutes.

Put the dough in a greased bowl, covered, to rise in a warm place.

When it has doubled, about an hour depending on the room temperature, punch it down and put the ball on an un-floured counter for rolling.

Once it is an even looking shape, spread it with the softened butter. You can soften it by putting it in a microwave at 50% power for 10 seconds.

Starting on a long side, roll the dough into a long cylinder. 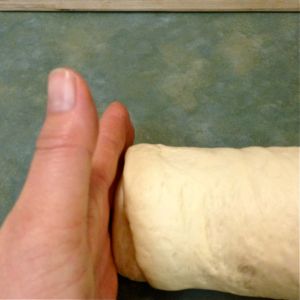 Tuck the end of each roll under, so they’ll stay put together while baking.

Place the rolls onto a parchment lined baking sheet (or two).  The rolls should not be touching each other before baking.Preheat the oven to 350° with the rack in the center of the oven.

Let the rolls rise while your oven preheats, for about 15 minutes.

Bake the rolls for 15 – 20 minutes.  Check at 15 minutes to see if they’re done.  They should just be starting to turn golden on some of the tops.  Give them a little extra time if you think they need it.  They shouldn’t be too firm; the doughiness is part of their charm.

While they are cooling, make the icing.

Beat the butter until creamy; adding in the vanilla while beating.

Add in the milk and icing sugar alternatively, until you have a fluffy, uniform icing.

Ice the Butterhorns, and finish by sprinkling with the chopped pecans.  Press the nuts lightly into the icing.

Do ahead.  The baked Butterhorns freeze beautifully.  Let thaw completely, then ice and top with nuts to finish and serve.