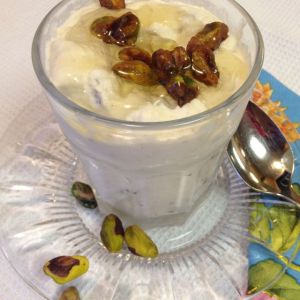 Frozen nougat is a lovely way to end a meal.  It is so light, and a half–cup serving is all that’s needed.  If the dinner has been a full one, it’s nice to serve something light and cool for dessert.  Remember that dessert is the last thing on your guests’ palates.  It needs to be memorable, in a good way!

I’ve served this many times over the years, but in a very simple version.  It was a bit of an epiphany for me to add in the espresso & bourbon, and switch the nuts to pistachio.  When I was making this batch, I was making enough for twenty.  After preparing the nuts (which I did the night before), it took me just over an hour to have all twenty covered and in the freezer, ready for a dinner in a couple of days’ time.

I served them with a tray of small mixed cookies, an easy but special finish to a great evening.

Note: Nougats need at least a day in the freezer before serving; they can be made up to three days ahead.

Several hours (or the day before), prepare the honeyed pistachios.

In a large skillet, melt the butter over medium heat.

Stir until the honey has melted, the nuts are coated and the mixture is bubbling.

Line a baking sheet with parchment.

Pour the honey nut mixture onto the parchment.

Spread out until the nuts are in a single layer.

Bake in the oven for 12 minutes.

Break the mixture into clumps of 1-3 nuts apiece.  They’ll be a bit gooey.  Store covered in a parchment-lined container, until ready to use.  Can be done up to two days ahead of making the nougat.

In the bowl of a stand mixer, beat the egg whites and cream of tartar, until soft peaks form.

Add in the 3 tablespoons of honey and continue beating until stiff peaks form. 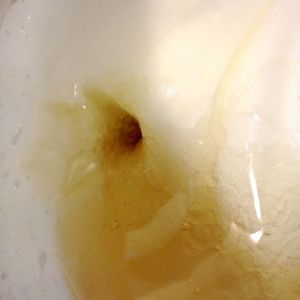 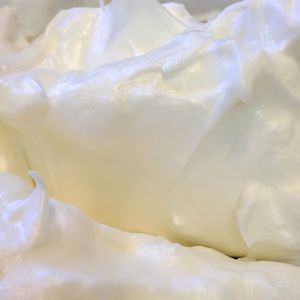 Pour the whipping cream into the mixer bowl.

Whisk in the icing sugar, cinnamon, cardamom, and espresso.  Beat until the cream mixture is thick and holds a firm peak.

Beat in the vanilla and bourbon, until just mixed.

Reserving enough pistachios to garnish with (I use about 7 per dessert), add the remainder to the cream & egg mixture.

Spoon the mixture in to small glasses or bowls.  These should be about 5 oz. so the nougat is not above the rim.

Garnish each dessert with the reserved pistachios. 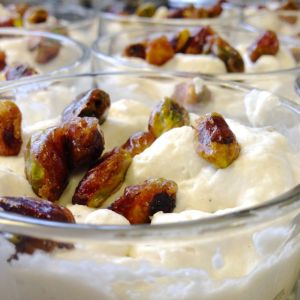 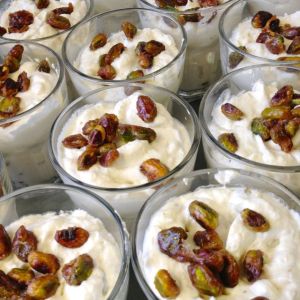 Cover each dessert with plastic wrap, place in shallow tins or containers, and freeze.

15 minutes before serving, take the nougats out of the freezer.

Drizzle each with a little honey, and serve.

Substitution: Pistachios are fairly expensive, and definitely the most expensive ingredient in this dessert, if you want to save a bit of money, use pecans instead.