This is our family’s fruitcake.  My parents had it for their wedding cake; we had it for ours, and many cousins and other relatives have as well.  Pounds of it are made every Christmas, soaked in brandy and left to age.  It makes a great snack for hiking, boating & fishing on the west coast (would probably work on any coast), so extra is made to use during the rest of the year.  Often I still have a piece in the pantry from the year before, found when I’m cooking that year’s batch.

Emily Allen was my mother’s mother’s mother.  She lived in London in a big old house on Palmers Green (still stands today) with her husband and large family.  Pictures we have of the early years of the 20th century show them scrambling over seaside rocks or climbing over hills and dales (literally) with picnic baskets and sports equipment in tow.  Her recipes from that time are barely legible now, faded on well used and splattered pages.  Her recipe showed two forms, a dark fruitcake and a light fruitcake.  There’s only a couple of ingredients that create the difference.  Honey and cider for the light cake and molasses and grape juice for the dark cake. There was a scribbled note about black currant jelly, and she may have used it instead of the molasses. I wonder if it really is her recipe, or was it her cook’s?

We prefer the light cake, so that is the recipe I have written. If you want to try the other form, just replace the two ingredients.  I read a description of perfect fruitcake written by a monk in the 1800’s.  He suggested that there should be barely enough cake to hold the fruit together and when sliced thinly it should resemble a stained glass window.  This recipe meets both of these requirements. It easily cuts to ¼“.

I don’t know if glacé cherries are the same now as they were a hundred years ago, but today’s version will have to do.  The rest of the ingredients are pretty ageless.  I used to make hundreds of pounds of this cake, selling it to make Christmas money. A 1# wrapped cake would sell for $10 in the 80’s.  I finally stopped when I realized that from late October to the last weekend in November (my latest date of production), that I’d made at least 2 batches if not 3 each day.  I decided I’d rather spend time with my family than make money to spend on them!

I still like to make some 1# cakes for gifts, and enough 2# cakes to keep our extended family happy.

Note: mixed peel – be sure it is actually citrus peel and not preserved rutabaga.  This is an inexpensive alternative that finds its way into Christmas cake fruit mixes.  Also, when buying cherries, be traditional and stick with red.  Green & yellow aren’t acceptable.

Each batch makes 6# of baked cake.

½# glacé cherries, try not to use much of the syrup

1 c good quality brandy (½ c for the first dousing, and ½ c for the second dousing a month later)

In a large bowl, whisk together 2 c flour, cinnamon & allspice with the baking powder and salt.

Add in the almonds, sultanas, raisins, currants, cherries, and peel.

Mix until all the nuts & fruits are lightly coated with the flour mixture.  Place a plate over the bowl and leave until the next day, when you’ll be making the cakes.

Butter and eggs should be at room temperature before starting.

In a large bowl, beat the butter until creamy.

Add in sugar, and continue beating until light and fluffy.

Add in the eggs, one at a time. Beat until each egg is fully incorporated, cleaning the sides of the bowl as you go.  Crack all the eggs into a 2 c measure, pour gently and they’ll slide out one at a time, as needed.

Beat in the remaining cup of flour and the lemon zest, until smooth and creamy. 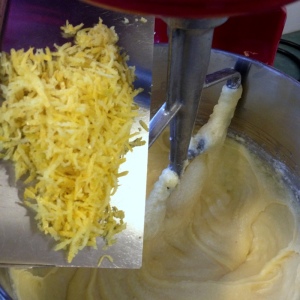 In a 2 c measure, pour in the apple cider or juice.  Top it with the honey, the almond essence & the lemon juice.  This will make the honey slide out of the cup more easily.

Pour the batter and the liquids over the nut, fruit & flour mixture.  Stir well until the nuts, fruits, and liquids are mixed into the batter.

When doing cakes of the same size try to have equal amounts of the fruit batter in each pan.  I usually use a scale.

To decorate, use the remaining whole blanched almonds to form a pleasing design on the top of each cake.  Press the nuts lightly into the batter.

1# cakes take 2 hours; 2# cakes take 2½ hours. Test for doneness by inserting a toothpick and checking that no wet batter is stuck to it.

Let rest in the pans for 20 minutes or so after baking. 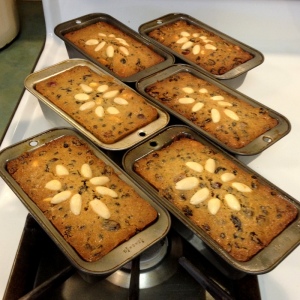 If using spring-form pans, run a knife around the edge, and release.  Carefully remove the bottom plate.

If using loaf pans invert and knock the bottom to release the cake into your hand.  If it doesn’t come easily, run a knife around the edge first.

Cool right side up on racks.

When completely cool, place each cake in the center of a piece of plastic wrap that will securely cover the whole of the cake.  For every pound of cake, pour just over a tablespoon of brandy slowly over the top.  Wrap the cakes securely.  When all the cakes have been doused and wrapped, put them in plastic bags that are large enough to seal.  More than one cake may go in a bag.

Let the cakes sit for a month.  Unwrap each cake, and douse again with the same amount of brandy.  Re-wrap securely and store for up to a year.  Wait for at least 2 weeks after the second dousing before eating.  Unless, like me, you don’t want to wait!

Remember to try the stained glass test – cut a thin slice and hold it up to a gentle light or the window.  Most importantly, enjoy.

Note: I made these cakes using an all-purpose Gluten Free flour for Christmas 2013.  Their texture was a bit different, but they were wonderful all the same.  So nice to be able to gift them to those who are wheat intolerant!