I am always on the lookout for vegetarian main dishes that can hold their own on a menu.  Gone are the days of simple substitutions for animal protein, to satisfy the needs of a few vegetarians. As I’ve mentioned before, meat is just one of several dishes that go together to make a meal.  There should be at least one complex, wonderful vegetarian dish that everyone at the table looks forward to.  I had been trying a few ideas along the lines of grain cakes, when I received an issue of Canadian Living that showed their most downloaded recipe, Quinoa Cakes.  So look no further – these are amazing.  I may have switched an ingredient or two, and made a slight change, but only because I may have had a replacement on hand and also considered the merit of incorporating the pine nuts into the cakes instead of sprinkling them on top.

Okay, memory lane time.  As vegetarianism became more mainstream, and we were starting to hear the word vegan, I can remember cooking rice with chicken stock at an event, and questioning whether or not we should be using it for the buffet.  The answer – sure, it doesn’t have meat in it.  I switched to water and returned the packaged stock to the storeroom. Really?

Then there was a Groom’s Dinner BBQ we were catering back in the early 2000’s.  Out of about fifty guests, a dozen or so were vegan (wow – cutting edge guests!).  We were given long lists of wants and desires.  We started by cooking about 4 – dozen tofu & veg skewers, followed by similarly glazed chicken.  When we were about half way through service, we realized we were down to about 10 skewers.  Everyone wanted some!  We quickly covered the remainder with foil and asked each guest from there on in if they were vegan.  We had just enough.  Since then, any service that includes vegetarians or vegans, I serve a full service of a vegetarian or vegan main.  Really?  It is just part of a gracious service. 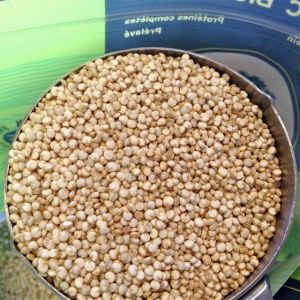 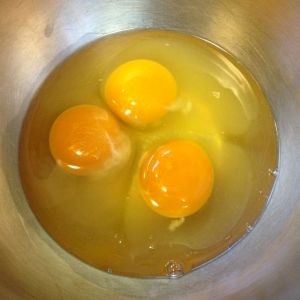 In fine sieve, rinse quinoa under cold water and drain.

In saucepan, bring quinoa, broth and water to a boil. Reduce heat and simmer, covered, for 15 minutes. 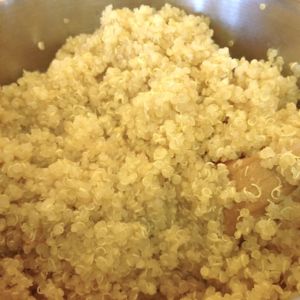 Stir well and transfer to a wide dish to cool.  Spread the quinoa so it’s not too deep, and it will cool quickly.

Meanwhile, in a skillet, heat a tablespoon of the oil over medium heat.

Fry the onion, garlic, salt and pepper, stirring occasionally, until onion is softened, about 4 minutes. 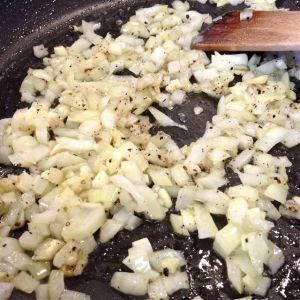 Add in the arugula; cook, stirring, until wilted and no moisture remains, about 3 minutes.

Add in the pine nuts and stir to heat through, about a minute. 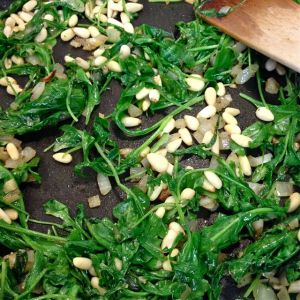 Fold in quinoa and arugula mixture. With wet hands, form into about 16 cakes; transfer to a parchment lined tray. 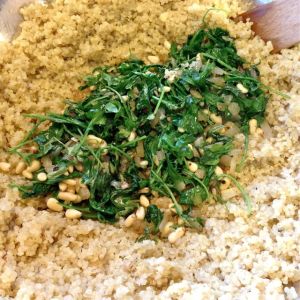 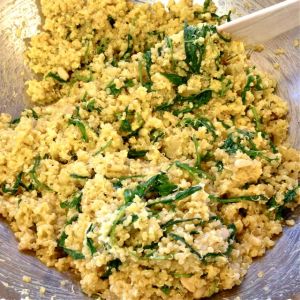 Refrigerate for an hour, this lets them set up so they don’t fall apart when cooking.

In nonstick skillet, heat about a third of the remaining oil over medium-high heat.

Gently place the cakes in the heated skillet.  Bits may crumble off, but generally they stick together quite well.

Fry a third of the cakes, turning once with 2 spatulas (use one to steady the cake as the other slides under it), until golden, about 8 minutes (4 minutes per side). 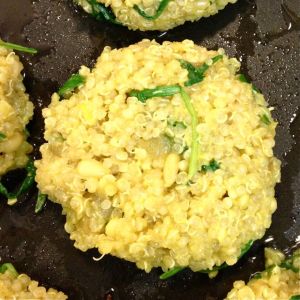 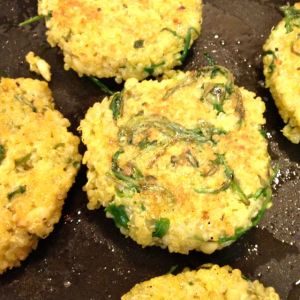 Set aside, covered, in the refrigerator.